What does MACD stand for?

MACD stands for Moving Average Convergence Divergence. MACD is a trend following indicator used to spot changes in the strength, direction, momentum, and duration of a trend in an asset's price.

A fast EMA responds more quickly than a slow EMA to recent changes in an asset's price. By comparing EMAs of different periods, the MACD line can indicate changes in the trend of an asset price. By comparing that difference to an average, an analyst can detect subtle shifts in the assets trend. Since the MACD is based on moving averages, it is inherently a lagging indicator. However, the MACD does not lag as much as a basic moving average crossing indicator, since the signal cross can be anticipated by noting the convergence far in advance of the actual crossing. As a metric of price trends, the MACD is less useful for assets that are not trending (range trading) or are trading with erratic price action. MACD Trading Signals


How do Forex Traders use the MACD indicator?


Traders tend to focus on three types of signal generated by the MACD indicator. These are:-


Signal Type A. The MACD line crosses the signal line

Signal Type B. The MACD line crosses the zero line - some call this the 'waterline'

The upwards cross is called a bullish crossover and the downwards cross a bearish crossover. Respectively, they can indicate that the trend in the asset is about to accelerate in the direction of the crossover. 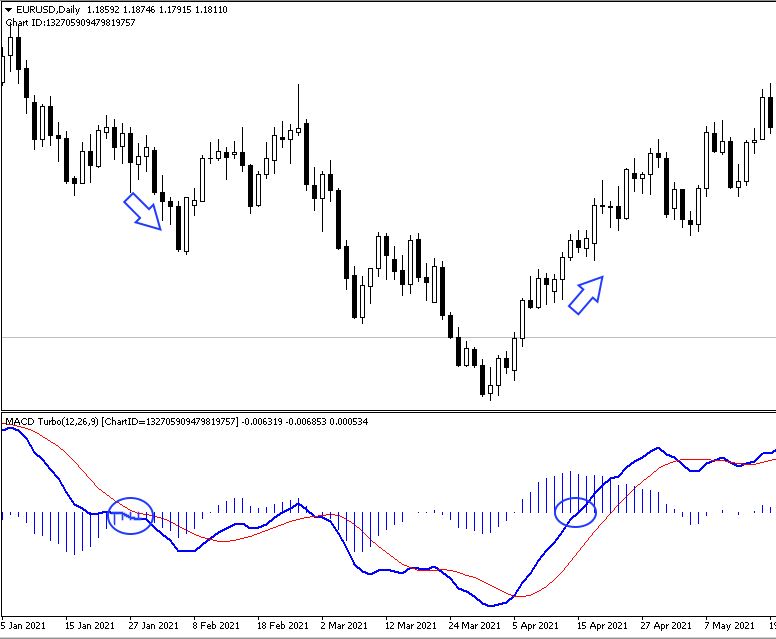 A crossing of the MACD line through zero happens when there is no difference between the fast and slow EMAs. A move from positive to negative is bearish and from negative to positive, bullish. Zero crossovers provide evidence of a change in the direction of a trend but less confirmation of its momentum than a signal line crossover. In the screenshot above we can see how price action reacted to MACD zero line crossovers on this Daily EURUSD chart. 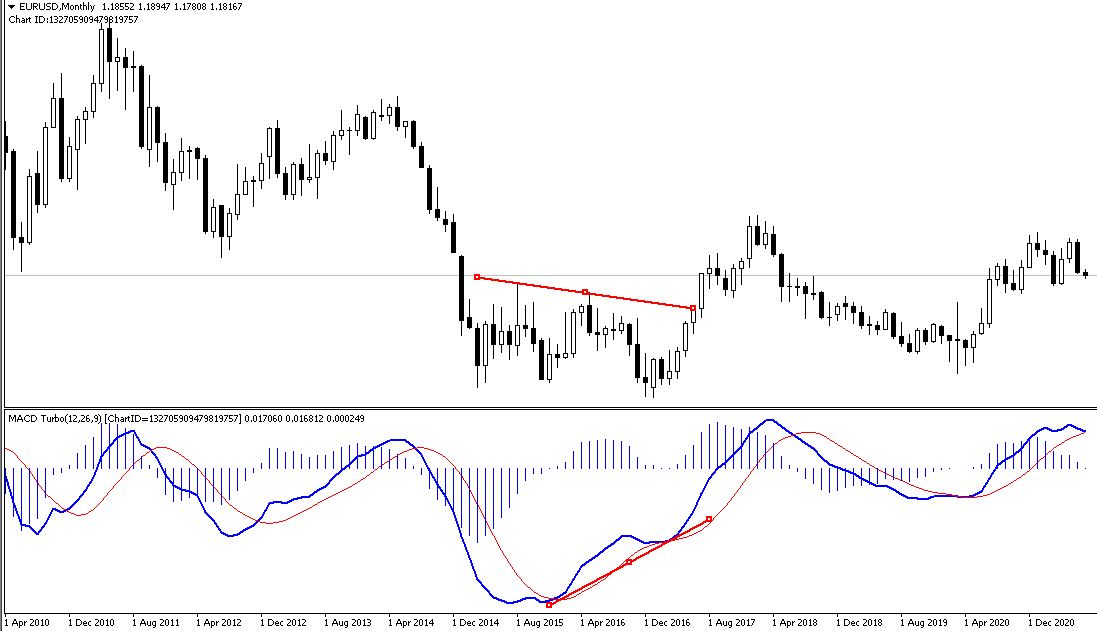 In the divergence example above we can see the MACD indicator is trending up - denoted by the trendline drawn on the MACD indicator plot whereas the price action for the EURUSD on the monthly chart is trending down - denoted by the trendline drawn through the swing highs. This is an early warning signal of an imminent trend change to the upside which played out in the subsequent price action. Whilst the upside potential appears limited the break out move to the upside was nearly 1000 pips!

The MACD is only as useful as the context in which it is applied. An analyst might apply the MACD to a weekly chart before looking at a daily chart, in order to avoid making short term trades against the direction of the intermediate trend. Analysts will also vary the parameters of the MACD to track trends of varying duration. One popular short-term set-up, for example, is the (5,35,5).

The JavaFX based alert module provides a far more sophisticated pop up alert module than the old fashioned MetaTrader MT4 pop-up version. When MACD crossover alert conditions are met the JavaFX alert module automatically pops up and simultaneously plays an audio file (if configured to do so by the trader). The trader can also manually display the alert history at any time (again impossible with the standard MT4 version)

MetaTrader MT4 traders can receive email and/or push notifications when MACD crossover alert conditions are triggered. Simply set up the MT4 email options and then click the Email button in the Alerts section of the MACD Java FX Interface. For Push notifications download and install the MetaTrader app on your mobile device and select the 'Settings' option in the MetaTrader app. Then scroll down to the 'Messages' section and copy the MetaQuotes ID into the Notifications Tab in MT4 under 'Tools/Options'

So what's so good about this MACD crossover indicator?

The FX Currency Strength Meter Service will help traders to optimize their forex pair selection and massively reduce the requirements to perform top down analysis on all the major pairs and crosses each day.